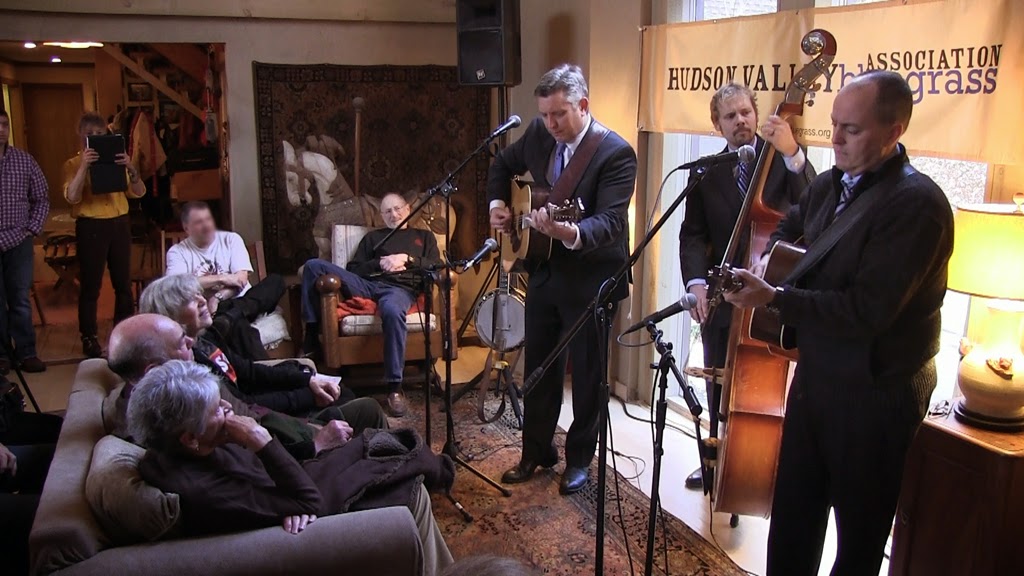 What do you call it when you find yourself out on an unseasonably nice day, in a warm an inviting environment, with the company of an appreciative group of music lovers, and in the presence of two masters of their craft?

Well, in the case of Sunday afternoon, December 14th, for me it meant being at the lovely Rosen home in Rhinebeck, NY for a house concert with the Gibson Brothers.

Leigh and Eric Gibson usually travel with a full bluegrass ensemble, and their shows resonate with all the flair, drive, and virtuosity of the great groups in that tradition. Recently though, the two brothers have been focusing their efforts on preforming in the classic brother duet style, bringing along ‘third brother’ bassist Mike Barber, whose been with them for over twenty years. The simplified lineup allows the brothers to access a different set of their own writing, as well as traditional material from a list of great songwriters in the country and bluegrass lineages.

The performances they have been performing as a trio are part of larger creative effort that includes an upcoming new release called “Brotherhood”, which pays homage to the tradition of brother duets. (In fact, you should probably stop pause reading this review right now, do yourself a favor, and go pre-order the album from Amazon.

I was fortunate to catch them perform these brother duet songs at Grey Fox earlier in the year, and recalled remarking to friends that it was my favorite performance of the entire festival. Now, several months later, we were treated to hearing them twice in the Hudson Valley, brought again to the area through the tireless dedication of those in the HVBA and the Rosen household.

If I had to choose, I’d say I enjoyed this performance even more than at Grey Fox. The beautiful sound and intimacy of the space was perfect for the trio format, and it was amazing how the three musicians immediately ‘dialed in’ to the acoustics of the space, creating as rich soundscape that would rival a first-class studio.

From Leigh’s opening guitar chunk on “Bye Bye Love” and the rich sympathetic harmonies of “The Sweetest Gift”, we knew we were in for a special treat. This was partly a concert for traditional American music aficionados and partly a master class for anyone who has picked up a guitar and sung.

In one of my favorite moments of the concert, Leigh opens a song, somewhat apologizing for having a cold, and then proceeds to fill the space with his warm tenor voice in a wonderful rendition of Norman Blake’s “Billy Grey”. The two brothers took turns with lead vocal duties, with Eric occasionally picking up the banjo and leveling the room with a classic bluegrass instrumental. Yes, the mode of the day was brother harmonies, but let’s get one thing straight: these guys got chops to spare! Throughout the concert, Mike Barber’s subtle underpinnings on bass added a dimension to the music that gave the impression of a much fuller band arrangement.

And of course, for us comedy fans, let’s not forget the infamous “brother banter” that goes on between Leigh and Eric, where they chide each other about song selection, singing, solos and whatever else — sometimes even in the middle of the songs. Part of what makes their shows so special is that they clearly appear to be having as much joy making the music as we are listening to them play it.

I could go on about the songs, but thanks to upcoming album, and the excellent videos by Fred Robbins that will be posted on the Hudson Valley Bluegrass Association website, you will be able to hear for yourself. Or, you can always ask HVBA’s Program Director Lynn Lipton. I sat across from her at the show, and I’d bet that she must know the lyrics to every song they played!